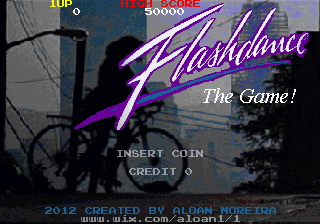 Relive the movie, Arcade Cabinet Style! Where you control Alex,
the young girl who dreams of becoming a professional dancer. (Features all the real sounds and songs from the movie!)
(R) Paramount Pictures Corporation
Directed by: Adrian Lyne
Music by: Giorgio Moroder

Alex is going to her day job at the steel mill. But she's gone crazy and is going against traffic!
Help Alex by avoid her getting hurt! Go near a car for stunt points! Get all the stunt points for a surprise
after crossing the bridge!

Time for some rest, a shower, some tv, and diet Pepsi... Then a serious warm up, to head up for the dancing institute application!

Act-5: The Institute of Dance and Repertory

Time for some investment in a dream Go to the Institute of Dance and Repertory, to learn the facts about being a ballet dancer

Act-6: visiting hanna: Ride your bike to Hanna's house for some encouragement

You can play up to Act 3 (level 3). This game is is still in very slow development (really slow - it is a tribute, freeware) There is a way to speed it up by donating, thus motivating me to continue to spend precious time working on it! to donate go here, and scroll to the paypal button: Donate

- More than 3 coins can now be inserted

- Added an awesome continue screen with a 10 second countdown to restart a level (should the player have credits) features a scrolling background and new song.

- Added a High Scores table, so players can write their initials, should they achieve enough points!

- Game event event/coding has been revised and improved